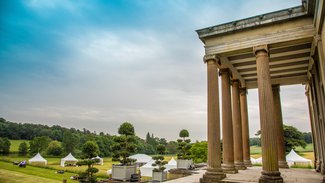 New productions of Macbeth, Tamerlano and The Yeomen of the Guard
are complemented by a unique night of jazz living legends and a dance world premiere

The Grange Festival spans the centuries with music by Monteverdi, Handel, Verdi, Sullivan,
Gershwin and Roustom, and boldly juxtaposes genres and encourages collaborations

The Grange Festival presents new productions of two dramatic operas and one of the more weighty works in the operetta canon during its 2022 season. Opening with Verdi’s first Shakespearean opera, Macbeth, on Thursday 9 June and followed a day later by Handel’s Tamerlano, written at the height of the composer’s creative powers, these works set the scene for the Festival’s boldest season yet. After drama comes joy and despair, love and sacrifice in the form of one of Gilbert and Sullivan’s grandest collaboration, The Yeomen of the Guard, considered by critics of the day to be Sullivan’s finest score. The Bournemouth Symphony Orchestra accompanies these three new productions as part of their ongoing residency.

The season continues with four living legends of the jazz world making a rare appearance in the UK, whilst the closing offering sees a welcome return of dance to the Festival with a world premiere, Clorinda Agonistes (Clorinda the warrior), created by Shobana Jeyasingh Dance and New English Ballet Theatre’s acclaimed 2017 production of The Four Seasons by Jenna Lee.

Following his acclaimed conducting of Verdi’s Requiem in 2017, Falstaff in 2019 and Manon Lescaut in 2021, Francesco Cilluffo continues a relationship with The Grange Festival, returning to conduct another Verdi masterpiece, Macbeth. Director Maxine Braham and designer Madeleine Boyd combine for the first time to create this new production. The cast is led by the award-winning Verdi baritone Gëzim Myshketa in the title role whilst celebrated British soprano Judith Howarth takes on for the first time the challenging role of Lady Macbeth. Festival favourite Jonathan Lemalu returns as Banquo, whilst 2017 Grange Festival Singing Competition finalist Samuel Sakker and Uruguayan ROH Jette Parker Young Artist Andrés Presno sing the roles of Macduff and Malcolm respectively.

Director Daniel Slater and designer Robert Innes Hopkins, the creative team behind the hugely admired Belshazzar in 2019, join forces again for Handel’s Tamerlano. Early music specialist Robert Howarth conducts a stellar cast that includes Raffaele Pe, one of today’s finest Handel interpreters and a memorable Nerone (Agrippina) in 2018, in the title role. Paul Nilon, who sang Ulysses in 2017, returns to sing Bajazet, one of the composer’s greatest tenor roles. Making their company debuts are Sophie Bevan in the role of Asteria and rising star Patrick Terry as Andronico. Two Samling Artists - Angharad Lyddon and Stuart Orme - complete the cast as Irene and Leone.

Christopher Luscombe, who has had resounding successes at The Grange with Candide, Falstaff and Pagliacci, now directs The Yeomen of the Guard, the Festival’s first foray into the world of Gilbert and Sullivan (26 June to 8 July). His collaborator on Falstaff Simon Higlett, designs, with choreography by Ewan Jones. Having previously conducted Pagliacci, conductor John Andrews also returns to the Festival to lead an impressive roster of British vocal talent that includes John Savournin, Nick Pritchard, Graeme Broadbent, David Webb, Nicholas Crawley, Ellie Laugharne (who garnered critical acclaim as both Susanna and Elisa Doolittle), Angela Simkin and Heather Shipp as the fearsome Dame Carruthers.

On Saturday 2 July, The Grange is proud to play host to a rare appearance in the UK of four great American jazz stars. The Marcus Roberts trio (Marcus Roberts, piano; Jason Marsalis, drums; Rodney Jordan, bass) and musical polymath Wycliffe Gordon (vocals and multi instruments) come together to showcase the development of jazz from Stride to Gershwin in From Blues to Rhapsody. These extraordinary musicians will also join forces with the Bournemouth Symphony Orchestra in what promises to be an unforgettable and unique artistic collaboration.

Dance makes a welcome return to The Grange Festival showcasing contrasting, yet complementary performances of ballet and dance by two pioneering UK dance companies: New English Ballet Theatre and Shobana Jeyasingh Dance. Both companies offer original and individual responses to Baroque musical masterpieces. The first half of the evening comprises NEBT’s acclaimed 2017 production of The Four Seasons, a 45-minute neoclassical ballet choreographed by Jenna Lee and set to Max Richter’s daring 2012 re-composition of Vivaldi’s 1723 violin concerti of the same name. This is followed by the world première of Clorinda Agonistes (Clorinda The Warrior), created by Shobana Jeyasingh. Monteverdi’s ground-breaking operatic cantata Combattimento di Clorinda e Tancredi, composed in 1624, will be performed live alongside Kareem Roustom’s contemporary (2021) version of the same story.

Artistic Director Michael Chance comments: “Live theatrical and musical performance was temporarily suspended globally by Coronavirus. It was never going to be dormant for long. The need and the desire to perform, and to witness and be transformed by that live performance is at the core of what it is to be human. Our 2022 Festival at The Grange covers a wide and eclectic range – operatic masterpieces, jazz luminaries, barrier-breaking dance, and all live and spontaneous. Music knows no boundaries and opens minds and hearts. I hope that a visit to The Grange next summer enjoyably demonstrates these truths to the full.”

The season brochure can be downloaded here.

Please note the new start time of 17:00 for all performances, including Sundays.