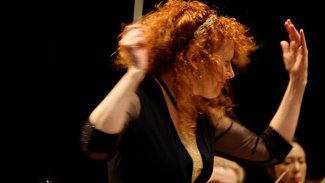 ‘Perhaps most remarkable of all is the “chamber” version by the US group Apollo’s Fire, directed by Jeannette Sorrell as a gripping, intimate drama… For me, this performance brings Bach’s Passion to life as well as any by more famous interpreters’

Interfaith dialogue is all too often drowned out by the hostile voices of anger and division. Jeannette Sorrell stands among those determined to strengthen the bonds that bring people together. Two of the Grammy Award-winning American conductor’s latest projects, an album of sacred songs from old Jerusalem and her debut with the Royal Liverpool Philharmonic Orchestra in Bach’s St John Passion, underline her determination to show that messages of love and compassion surpass those of resentment and hatred. They also reflect a revelation about her personal identity that surfaced by chance three years ago when she discovered the true story of her Romanian Jewish father’s persecution during the Holocaust and his post-war reinvention as a Swiss migrant to the United States.

O Jerusalem! City of Three Faiths, set for release on the Avie label on 11 February 2022, offers a programme of sacred and secular music from the Holy City’s ancient Jewish, Arab, Christian and Armenian quarters. The album documents Sorrell’s performance with Apollo’s Fire, the Cleveland-based period-instrument ensemble she founded thirty years ago, recorded live at Cleveland Museum of Art on the eve of the March 2020 lockdown. The company of thirty artists includes musicians from Jewish, Christian and Muslim backgrounds, reflecting the three faiths of Jerusalem. The recording’s tracklist is rooted in the music of the people of Jerusalem, of neighbours of different faiths who coexisted in peace for centuries. Israeli recorder and ney player Daphna Mor, Palestinian oud player Ronnie Malley, and Jerusalem-born, Brooklyn-based Palestinian qanun player Zafer Tawil bring their own musical expertise and understanding of the city’s history to the album’s rich mix of sounds and moods.

The release of O Jerusalem! precedes Jeannette Sorrell’s debut on 14 April as guest conductor with the Royal Liverpool Philharmonic. She has chosen to present one of the great landmarks of Christian sacred music, Johann Sebastian Bach’s St John Passion, in her own dramatized version (which she calls “A Dramatic Presentation”). Ed Lyon takes the part of Evangelist, with Roderick Williams as Christus and Joshua Bloom as Pilate. The fine solo team also includes the Scottish Maltese soprano Carine Tinney and the countertenor Robin Blaze, with the chorus drawn from members of the Royal Liverpool Philharmonic Choir.

Sorrell’s dramatized production of Bach’s St John Passion was premiered to high acclaim in New York City and Cleveland in 2016, and can be seen on YouTube. “What I try to do is bring the characters to life as complex and frail human beings who are swept up in something far larger than themselves – and they are trying to do the right thing, as we all are,” she said. “The singers in the character roles perform from memory and interact with each other. The dramatic narrative and the reflective arias will be done on different parts of the stage, which I think helps clarify the work’s structure and also encourages listeners to contemplate the universal message of the Passion story. It’s been lovely to work with the RLPO on planning this performance and I really look forward to working with the orchestra and choir.”

The St John Passion has a troubled legacy of possible antisemitic overtones due to the frequent references to the Jews as being responsible for the killing of Jesus. Sorrell has confronted this issue head-on by replacing those references with words that offer a more universal reflection on Christ’s suffering. “Unlike Handel and Telemann, Bach took the trouble to change the most antisemitic passages in the standard 18th-century poetic Passion text by Barthold Heinrich Brockes, which all three composers used. I’ve made additional changes of the kind Bach made himself, to show that the responsibility for Christ’s death was shared by us all as imperfect humans.”

Sorrell’s feeling for the close connection between the Abrahamic religions of Judaism, Christianity and Islam has deepened and matured since she discovered the truth about her father’s background in 2018. She and her sister had been raised to believe that he came to the United States after the Second World War as a migrant from Switzerland. Eager to apply for a Swiss passport to make travelling to and around Europe easier, Jeannette Sorrell would periodically ask her father to show his immigration papers only to be told that they were lost. She joined Ancestry.com to search for the relevant paperwork and, with the first click, gained access to her father’s naturalisation certificate from 1962. To her surprise, its data showed that he had changed his name from its Hungarian-sounding, possibly Jewish original.

The discovery prompted Sorrell to take a DNA test, the results of which showed her genetic heritage to be 50% Ashkenazi Jewish genes. Documentation supplied by the United States Memorial Holocaust Museum, meanwhile, revealed that her father had been deported at the age of thirteen together with his parents to Auschwitz-Birkenau, where Sorrell’s grandmother was murdered and her father and grandfather put to work before being transferred to Buchenwald. While her father somehow survived the hell of Auschwitz and Buchenwald for a year, his own father perished there. She and her sister grew up believing that her father’s parents had died in a plane crash in 1944, a mysterious event that raised questions about how or why they were able to take a flight during the war. “My mom told us not to ask daddy about it because it’s so painful for him. My sister and I were brought up as church-going Lutherans and we were told that Daddy had been raised Catholic in French Switzerland.”

When she told her father what she’d learned about his origins, it became clear that building a new persona helped him deal with the trauma of his childhood experiences. Their profound conversation led Sorrell to explore Jewish music, culture and identity. “I felt I knew so little about it,” she notes. “I wanted to know where it might lie inside me, as my “Jewishness” was so obvious to an elderly friend of mine in Cleveland who happens to be a Holocaust survivor. She pointed out that I had always been drawn to Jewish people, from my favourite professors and best friends and college to my partner, Jeff, who’s the baritone soloist on O Jerusalem! This album is an exploration of that identity as well as a way of showing how music brought people of different faiths together and helped them live as true neighbours.” 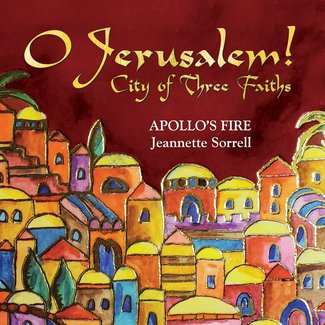 Jeannette Sorrell
Grammy-winning conductor Jeannette Sorrell is recognised internationally as one of today’s most compelling interpreters of Baroque and Classical repertoire. She is the subject of the 2019 documentary by Academy award-winning director Allan Miller, titled Playing With Fire.

Sorrell studied conducting at the Aspen and the Tanglewood music festivals under Leonard Bernstein and Roger Norrington and harpsichord with Gustav Leonhardt in Amsterdam. She won First Prize in the Spivey International Harpsichord Competition, competing against over 70 harpsichordists from Europe, Israel, the U.S., and the Soviet Union.

She is the founder of Apollo’s Fire and has led the renowned ensemble as conductor and harpsichord soloist at London’s BBC Proms, Carnegie Hall, Madrid’s Royal Theatre, London’s Wigmore Hall, and the Tanglewood, Ravinia, and Boston Early Music festivals, among others. Sorrell and Apollo’s Fire have released 26 commercial CDs, including 8 bestsellers on the Billboard classical chart and a 2019 Grammy winner. Her recordings include the complete Brandenburg Concerti; Bach’s St John Passion; Handel’s Messiah; and the Monteverdi Vespers.