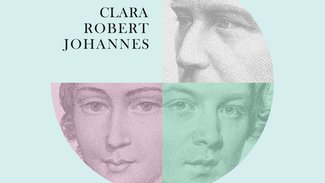 Three Of A Kind

Music history might have taken a different turn if female musicians of Clara Schumann’s calibre had received the same opportunities as her husband Robert and their protégé Johannes Brahms. Canada’s National Arts Centre Orchestra and its Music Director Alexander Shelley raise the ‘what if’ question with their ongoing recording project Clara - Robert - Johannes, placing works by each composer in context to highlight their collective contribution to 19th-century culture. The second title in the four-volume series, set for release by Analekta on 3 December 2021, couples the Second Symphonies of Robert and Johannes with two groups of Clara’s songs.

Alexander Shelley has worked with Clara Schumann scholar Julie Pedneault-Deslauriers and Brahms biographer Jan Swafford to create programmes that illustrate the lives and works of the three composers. Each album couples one of the four symphonies of Robert Schumann and Johannes Brahms with a representative selection of Clara Schumann’s chamber works, songs and extant orchestral pieces, including several rare and special gems.

Brahms, who already idolised Robert Schumann before their first meeting in 1853, was hailed by the older man as a genius and the coming saviour of German music. Robert and Clara took the young man from Hamburg into their circle; in return, Johannes supported Clara following her husband’s decline into the psychosis that led to his death in 1856, sought her advice many times thereafter on artistic and personal matters, and remained her lifelong friend. After the long struggle to compose his first symphony, Brahms’s cheerful Symphony No.2 (1877) followed less than a year after its predecessor. The NAC Orchestra and Alexander Shelley revel in the work’s elan and striking contrasts of mood. Five songs by Clara, including two more from her Op.13, bring the album to a close.

“These recordings are part of the NAC Orchestra’s work to look again at the great diversity of composers from the past and create new opportunities for today’s composers and creators regardless of their gender, ethnicity or background,” observes Alexander Shelley. “Clara, one of the great pianists of the age, was much more famous on the international stage than her husband. It’s fascinating to follow the lines of influence that connect the songs she wrote during the early years of her marriage to the second symphonies of Robert Schumann and Brahms. I have discovered fresh things in both orchestral works from listening to Clara’s songs and am delighted to be able to share that with others.”