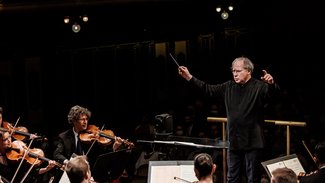 Concerto Budapest, one of Hungary’s finest symphony orchestras, is set to add a significant new chapter to its long and distinguished history when it makes its UK debut this summer. The 80-strong ensemble and its charismatic Chief Conductor and Artistic Director András Keller will perform works from the core of their repertoire at six of Britain’s leading concert halls. Their week-long tour begins in London at Cadogan Hall on Monday 6 June and unfolds with dates at Guildford’s G Live (7 June), Anvil Arts in Basingstoke (8 June), Birmingham Symphony Hall (9 June), Manchester’s Bridgewater Hall (10 June) and the Usher Hall in Edinburgh (12 June).

Five of the tour’s concerts comprise the compelling combination of Bartók’s Concerto for Orchestra, Mozart’s Piano Concerto No.23 in A major K.488, with Angela Hewitt as soloist, and Beethoven’s Symphony No.5. Concerto Budapest’s Manchester programme offers the equally attractive mix of Zoltán Kodály’s Dances of Galánta, Mozart’s Piano Concerto No.23, Romanian Rhapsody No.1 by George Enescu and Beethoven’s Fifth Symphony.

Concerto Budapest’s first visit to the UK follows the orchestra’s extensive tours of East Asia in 2017 and 2019 and its critically acclaimed debut at the Folle journée festival in Nantes two years ago. András Keller’s choice of repertoire for this summer’s tour plays to his orchestra’s fundamental strengths and reflects their collective determination to connect with audiences at the most profound emotional level.

“We want to introduce Hungarian music and culture to British audiences in a befitting manner,” the conductor comments. “My only desire is to give authentic and effective performances. Concerto Budapest are famous for playing music with enormous heart and soul. On our last major tour in France, before the Covid-19 pandemic, there was an amazing energy in the orchestra. Things will be no different when we come to the UK. The orchestra’s ethos is simple: we have to be transformed into the sounds we play. This is how music happens with us; in this way, it’s possible to convey the music’s soul to our audiences. This demands total devotion, which is what I learnt from my masters, from György Kurtág, Ferenc Rados, Sándor Végh.”

Founded in 1907 as the Hungarian Symphony Orchestra, Concerto Budapest adopted its present name a century later. András Keller, who began his tenure as Artistic Director and Chief Conductor during the orchestra’s centenary year, has built on its historic legacy while attracting many of Hungary’s foremost young chamber music players to its ranks. Under his leadership, Concerto Budapest has developed a distinctive sound, rich in tonal shading, expressive contrast and dynamic range; he has also added many contemporary compositions to stand in company with its repertoire of symphonic masterworks. György Kurtág, who regards Keller as his foremost student, eagerly accepted the conductor’s invitation to become the orchestra’s Honorary President and continues to be a major influence on its artistic philosophy.

“My idea in symphonic music is to have 70-80 people playing chamber music with each other and singing together like a polyphonic choir,” notes András Keller. “I believe that all instrumental music is a kind of transformation of human singing. When we make an instrument ‘sing’, then usually anyone hearing this is imbued with a sense of happiness. The unique marvel of the symphony orchestra lies in the fact that the sound of very many different instruments is capable of giving unbelievable tones, nuances and characters to a musical melody, yet all these different sounds are capable of becoming one, and many musicians are able to feel as a single soul, to love with a common heart, to live the melody. One of the greatest wonders is when this happens in a piece of music. Through Concerto Budapest, I strive for speech-like music-making and the personification of sounds.”

Concerto Budapest regularly collaborates with world-class soloists from Hungary and beyond, and in recent seasons it has performed with, among others, Martha Argerich, Khatia Buniatishvili, Isabelle Faust, Gidon Kremer, Miklos Perényi, Dezső Ránki, Vadim Repin and Dénes Várjon. It has won countless new admirers thanks not least to Imre Szabó-Stein’s video productions, which have proved a strikingly successful addition to Mezzo, the French television channel devoted to classical music, and The Violin Channel. Their latest and most ambitious film project, Carpathian Rhapsody, documents the orchestra and András Keller’s recent exploration of the immensely rich musical culture and artistic heritage of the Carpathian Basin and the fruitful dialogue between Gypsy music, classical compositions and jazz. It was broadcast on Mezzo to critical acclaim last Christmas and received the Silver Tower Award in the Best Performing Arts Film category at the 2022 New York Festivals TV & Film Awards.

András Keller, born in Hungary in 1960, began playing violin at an early age. He studied at the Liszt Academy of Music in Budapest, where his teachers included György Kurtág and Ferenc Rados; he subsequently studied with Sándor Végh in Salzburg. Keller’s international breakthrough came in 1983 when he won the Jenő Hubay Violin Competition. In addition to regular engagements as a concerto soloist, he served as leader of the Budapest Festival Orchestra from 1984 to 1991 and has established a worldwide following as founder and leader of the Keller String Quartet, one of the world’s leading chamber music ensembles which over the years has collected around 70 prestigious international prizes and awards for its recordings. György Kurtág and Jörg Widmann are among leading composers who have written works for the Keller Quartet. András Keller served as head of the Chamber Music Department at the Franz Liszt Academy of Music from 2012 to 2015 and has been professor of violin at London’s Guildhall School of Music and Drama since 2016. His contributions to Hungarian music and culture were recognised in 2021 with the Kossuth Prize, Hungary’s most prestigious award for the arts.

Concerto Budapest’s development over the past fifteen years stems from the orchestra’s committed teamwork and shared artistic vision. “We seek the truth of the given musical concepts, and whittle away at the ensemble playing and sound day by day, trying our best to discover the music together,” observes András Keller. “It has been like this ever since I’ve been here. Every rehearsal brings new knowledge, a new opportunity to play music better. The most important thing is always to be attuned to each other, to be able creatively – and constantly – to communicate with each other. When we find this flow, then we have a good day!”

Bartók Concerto for Orchestra, BB 123
Mozart Piano Concerto No.23 in A major, K.488
Beethoven Symphony No.5

Kodály Dances of Galánta
Mozart Piano Concerto No.23 in A major, K.488
Enescu Romanian Rhapsody No.1 in A major
Beethoven Symphony No.5