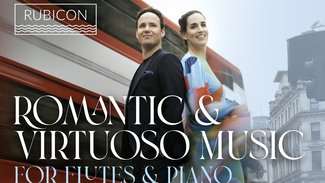 Family ties, anniversary celebrations and joyful music for two flutes belong to the compelling story of a new recording from Noemi Gyori and Gergely Madaras. The recording, set for release on Rubicon Classics in April 2022, trains the spotlight on virtuoso compositions by the Doppler brothers, Franz and Karl, outstanding musicians from the Austro-Hungarian Empire’s nineteenth-century heyday. The album, made in partnership with pianist Alexander Ullman, celebrates the bicentenary of Franz Doppler’s birth. It also marks a significant personal milestone in the lives of its two flutists, who first met as students and formed a duo in their native Hungary twenty years ago, became a couple and were married soon after.

Franz Doppler (1821-83) and his brother Karl (1825-1900) were born in Lemberg, then on the eastern fringe of the Austro-Hungarian Empire, today the city of L’viv in western Ukraine. They earned enviable reputations as performers and composers in Pest, their adopted home in Hungary, across the Danube from Buda, and were in high demand as a flute duo throughout Europe. Noemi Gyori and Gergely Madaras performed works by the Dopplers many times before their individual careers took off, keeping Gyori busy with her solo and chamber music recitals, while Madaras’ burgeoning conducting career also intervened and left little space in the diary for duo dates - especially so since his appointment as Music Director of Orchestre Philharmonique Royal de Liège. The initial coronavirus lockdown, however unwelcome, offered an opportunity for the couple to reconnect with their flute duo past and start the process that ultimately led them to make their first recital album.

Gyori and Madaras chose to record five compositions from their extensive duo repertoire: the delightful Duettino Americain and Andante and Rondo by Franz Doppler; the Rigoletto-fantaisie and Fantaisie sur des motifs hongroises by both Dopplers; and the Trio in G major Op.119 by Friedrich Kuhlau (1786-1832). The latter, a nod to the couple’s victory in the duo category of the International Friedrich Kuhlau Flute Competition, stands among the German-born Danish composer's finest chamber works. These large-scale duo works are complemented by the charming Chanson d’amour and the fierce Fantaisie pastorale hongroise by Franz Doppler, performed by Gyori and Ullman.

“This recording was born out of recent times,” recalls Noemi Gyori. “Gergely and I gave more than a hundred and fifty recitals together but over the past years we were both busy focusing on our own musical journeys and on top of that, after Gergely’s conducting career took off, he had substantially less time to play the flute. When lockdown came last year, we gave two quarantine concerts for our neighbours in Northwest London. We live opposite a church which I discovered has amazing acoustics, perfect for the flute. The vicar is a wonderful keyboard player and was very welcoming, so we began making little recordings there for our pleasure and for friends and family. We then decided to take time, of which there was finally some to spare during the pandemic, to make an album together.”

The Doppler brothers emerged as prime candidates for the duo’s debut recording – and Madaras’ first as an instrumentalist – thanks to the power of their music to raise spirits and make audiences smile. “These pieces are technically demanding and genuinely uplifting,” comments Gergely Madaras. “While we practised them over the last year, we enjoyed refining and polishing every detail in the music, in order to be completely together in breathing, phrasing and articulation and bring out the countless little jocose twists in each piece. The goal of the album is to celebrate this wonderful repertoire and make it better known.”

Noemi Gyori pays tribute to her former professor, András Adorján, whose pioneering editions have restored several significant Doppler works to the modern flute repertoire. “He was one of the first to draw attention to their music and continues to rediscover fine pieces that were thought to have been lost,” she notes. “I was fortunate to work with Adorján in Munich on several Doppler pieces and Gergely and I have been playing his edition of the Doppler brothers’ Rigoletto-fantasie ever since we met.”

Franz and Karl Doppler owned a broad collective experience of theatre, gained at first as members of opera orchestras in Pest and later as successful composers for the Hungarian and German stage. “You can feel they both knew how to write bankable, applause-inducing pieces and earworm melodies,” observes Madaras. “Franz also made orchestral transcriptions of Liszt’s Hungarian Rhapsodies, and was an accomplished orchestrator. They both understood the characteristics and technical brillance of the two flutes as an ensemble, and also had the skills needed to write popular works of the highest quality. Like Liszt and Brahms, they were inspired by what they thought was Hungarian folk music – but which was in fact the music of urbanised gypsy bands. That repertoire played a big part in their upbringing and cultural heritage. Its legacy is there on the album in Franz and Karl’s Fantaisie sur des motifs hongroises and Franz’s Fantaisie pastorale hongroise.”

Noemi Gyori and Gergely Madaras found the ideal pianist in Alexander Ullman, winner of the 2017 International Franz Liszt Piano Competition, known for his technical prowess and nuanced music-making. He showed a natural affinity for the Dopplers’ art and revelled in their writing for keyboard. “It was crucial to find someone who understands the sense of humour in this particular style of music, especially the Hungarian-inspired pieces,” Gyori comments.

“We needed a pianist who could team up with two musicians who have played together for twenty years and have a very strong personal approach. We knew Alex thanks to the generous support we’ve each received from the Philip Loubser Foundation. He immediately wanted to join us for the recording and was so perceptive in his feeling for rhythmic timing, colour, dynamic contrasts and the interplay between flutes and piano. It couldn’t have worked out better. We finished the recording with a boost of energy, and felt we wanted to record even more! Our hope is that people will catch this spirit-lifting mood of optimism and enjoyment when they listen to the disc.”