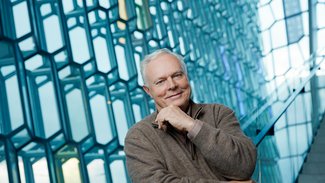 "… delivered with delicious brio by Tortelier and his virtuosic Icelanders"

Maestro Tortelier completed a three-year term as the Iceland Symphony Orchestra’s interim Chief Conductor earlier this year. Their recent recording of Gounod’s symphonies for Chandos, chosen by The Sunday Times as ‘Album of the Week’, documents the partnership’s striking success. The conductor’s tour programme reflects the orchestra’s world-class artistic virtues and versatility. They will open with a suite drawn from Bizet’s incidental music for L’Arlésienne and explore Ravel’s Piano Concerto for the Left Hand and Aeriality by the orchestra’s Composer-in-Residence Anna Thorvaldsdóttir. Their concerts will also include either Sibelius’s Symphony No.1 or a generous selection of works from Prokofiev’s Romeo and Juliet.

“We have built such a strong relationship since I became Chief Conductor in 2016,” notes Yan Pascal Tortelier. “The Iceland Symphony Orchestra was already on the way up when I arrived and definitely remains on that path. I try to communicate what I have learned since I began studying music nearly 70 years ago and add my knowledge to their many qualities. I think there’s a genuine freshness about the way we work together and they are naturally open to new ideas, many of them coming, shall we say, from ‘family evidence’! The Iceland musicians appreciate this connection to my personal tradition, to what I learned growing up from my father. It is a true privilege to lead them on this UK tour and I look forward to sharing our work with the great British public.”

Yan Pascal Tortelier made his debut with the Iceland Symphony Orchestra as a guest in 1998 and has worked with them regularly since 2012. He agreed to serve as interim Chief Conductor while the orchestra looked to make a long-term appointment. Eva Ollikainen, announced as the ISO’s Chief Conductor Designate in June 2019, will take charge at the beginning of the 2020-21 season. The orchestra has grown in size and international standing since first working with Tortelier, a process supported by its residency at Harpa, one of the world’s greatest concert halls.

“This must be the most spectacular environment for any orchestra’s home,” notes Yan Pascal Tortelier. “The building itself is a great work of art and its location, looking across Reykjavík‘s old harbour to a very special Icelandic landscape, is a natural wonder and always an inspiration. The love for nature is in my family background, all the way back to my great-grandfather and father and forward to my boys and grandsons. From my room in Harpa, I can see the distant volcano where the characters in Jules Verne’s Journey to the Centre of the Earth begin their underground adventures. We make music in this unique place by the edge of the Arctic Sea and will bring that spirit with us on tour.”

Anna Thorvaldsdóttir’s Aeriality, written for the Iceland Symphony Orchestra, holds a special place in Yan Pascal Tortelier’s affections. He recalls their performance of the work on his 70th birthday while on tour to Sweden two years ago. “It is so atmospheric, expressing impressions and sensations of nature from the North,” he observes. “Her music evokes strong emotions out of the mystery of Iceland’s natural landscape.” Thorvaldsdóttir’s composition takes its place in an eclectic mix of works, rich in expressive variety and imagination. “Sibelius comes out of the German symphonic tradition but he cannot help projecting extraordinary Nordic invention into his work. There’s an irresistible power in his First Symphony, which is the power of his inspiration and personality. And we will play Ravel’s phenomenal, unique masterpiece. The Piano Concerto for the Left Hand allows me to bring on board Jean-Efflam Bavouzet, with whom I have recorded both Ravel concertos, and to work with Yeol Eum Son for the first time.”

The Iceland Symphony Orchestra, notes Tortelier, is able to produce the clarity of sound essential to French music. He will open their tour concerts with his personal choice of five pieces – Pastorale, Carillon, Minuet, the Adagietto, and Farandole – from the two L’Arlésienne Suites. “Poor Bizet died before knowing that he had written the most popular of all operas with Carmen. What an injustice! But we have a taste of his talent for melodic beauty, harmonic strength and delicacy in his incidental music to L’Arlésienne. I prefer to follow my own combination since the order in the familiar Suites sounds to me a little unconnected. I do the same with Prokofiev’s Romeo and Juliet, choosing music from all three Suites to create a sense of symphonic continuity and keep the ballet’s authentic ending, one of the most extraordinary conclusions in all music.”

Lára Sóley Jóhannsdóttir, Managing Director of the Iceland Symphony Orchestra, notes that the UK tour offers a fitting 70th anniversary celebration of the orchestra’s history. And it provides the ideal opportunity to demonstrate its present excellence on the international stage. “The orchestra made its debut at the BBC Proms five years ago but has never toured the UK before,” she observes. “This is the Iceland Symphony’s most extensive tour to a European country since 1981. We have been so fortunate to attract many outstanding players from overseas who have made their homes in Iceland and are part of the orchestra’s outward-looking identity. This connection to Britain is so important to our international character. The tour is a great opportunity for the orchestra to go with this outstanding conductor, who is so well known to British audiences, and unlock the creative energy that comes from performing in so many wonderful venues.”