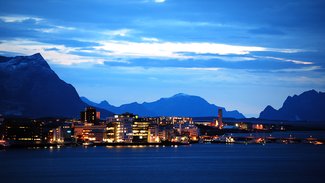 Music on Top of the World

Music and community are set to grow ever closer in Bodø. The compact city, located just north of the Arctic Circle on Norway’s rugged coastline, is preparing to launch the first edition of biennial event Aria Borealis Bodø (24 June – 2 July 2022). Its innovative programme comprises the Aria Borealis Bodø International Competition for Early Music Singers, a companion festival of Early Music and opportunities for music lovers of all ages to explore rich repertoire in company with inspiring performers from the Nordic countries and beyond.

Aria Borealis Bodø represents a distinctive new combination of competition and festival. The programme’s fresh format flows from its creators’ determination to place eight outstanding competition winners in company with an ensemble of historically informed performance specialists and treat them as equal partners in chamber-scale performances. Audiences will be able to follow the creative process as it unfolds from rehearsals to concerts, and discover more about the collaborative art of interpretation as the nine-day event unfolds.

The competition, open to singers born in 1987 or later, began in January with a digital round that attracted over one hundred entrants from 39 countries. Eight winners have been chosen from a strong field by the distinguished jury of British soprano Dame Emma Kirkby, harpsichordist and Artistic Director of Concerto Copenhagen Lars Ulrik Mortensen, Theater an der Wien director Stefan Herheim, Finnish soprano Tuuli Lindeberg and Swedish tenor Anders J. Dahlin.

“The many applications for Aria Borealis revealed a wealth of young singers with fine voices, of varying sizes, already strong, healthy and flexible;” comments Dame Emma Kirkby. “Beyond this we looked for special qualities: awareness of and response to different contexts and acoustics, engagement and dialogue with accompanying instruments, and the eloquence that comes from a real engagement with text. With these in place and so many colours revealed, singers emerged as unmistakeable characters; we have eight fantastic individuals - and could have chosen many more!”

Seventeenth-century Naples comes to Bodø on 24 June in the form of dances and songs performed by L’Arpeggiata and Christina Pluhar. Their performance immediately follows Aria Borealis Bodø’s opening ceremony and marks the start of a series of concerts that combine elements of festival and competition.

A surprise concert given by jury members and friends is scheduled for 25 June, with Emma Kirkby, Lars Ulrik Mortensen, Tuuli Lindeberg and Anders J. Dahlin performing together for the first time. Lutenist Rolf Lislevand, star of Norwegian folk music Berit Opheim and one of the world’s leading bandoneon players, the Norwegian Per Arne Glorvigen, explore the points where folk and Baroque music meet on 26 June, while Bjarte Eike and Barokkanerne are joined by Tore Johansen and Bodø Rhythm Group on 29 June for Baroccan Jazz, a celebration of the art of improvisation.

Bodø, long known for its breathtaking landscape, has expanded throughout the past decade to become a major cultural centre. Its international profile has soared since it was named European City of Culture for 2024. The inaugural Aria Borealis Bodø represents a pioneering collaboration between Nordic Baroque Scene (NBS), a network formed by the four leading Nordic Baroque orchestras, and Bodø’s Stormen Culture Centre, a concert hall, library and multi-purpose performance space opened in 2014.

Rasmus Adrian, a former managing director of Concerto Copenhagen and now director and CEO of Stormen Concert Hall, came to Bodø two years ago. He had helped shape existing NBS plans to create an Early Music singing competition and identified Bodø as its ideal host city.

“We have a beautiful concert hall with excellent acoustics,” notes Adrian. “There are so many possibilities for presenting the performing arts at Stormen, not just in the main hall. The different spaces within the venue will serve the music and also help us build a special relationship between the eight competition winners, our instrumentalists and our audience. This is a unique opportunity for the concert hall to host and develop an event that is different from the traditional format for classical music competitions.”

Aria Borealis Bodø’s competition winners will work with a pool of players drawn from Nordic Baroque Scene’s four constituent ensembles: Concerto Copenhagen, the Finnish Baroque Orchestra, Drottningholm Baroque Ensemble and Barokkanerne (Norwegian Baroque Ensemble). “We have invited those musicians who enjoy doing more than performing a concert and going home again,” observes Mari Giske, an experienced period-instrument string player and project manager for Nordic Baroque Scene. “Our players will take part in workshops and masterclasses, and also reach out to an enthusiastic audience from Norway and around the world. We hope to see the most knowledgeable amateur musicians coming from all parts of Europe and elsewhere to Bodø, along with students and professional musicians who would like to develop their skills in Early Music. And of course we want to welcome our local audience and encourage their curiosity and sense of ownership of Aria Borealis Bodø. This is all about the music and the enjoyment of it.”

Community spirit is central to Aria Borealis Bodø. Audience members and performers alike will be brought together by the schedule of concerts, lectures, lunchtime talks, masterclasses and many other events. Intergenerational connections are sure to be reinforced by UngBarokk, a summer course for young musicians, and the Aria Borealis Bodø Sessions, a course involving music students and amateur and professional musicians. Concerts and other sessions will be streamed to broaden the audience reach far beyond Bodø.

Aria Borealis Bodø’s commitment to openness and exploration will be embedded in the competition’s concert programmes. These will include indigenous folksongs from each winner’s homeland, specially arranged by NBS musicians, alongside Baroque repertoire chosen from the period 1600 to 1750. The in-person competition’s first round (27 June) will comprise open rehearsals with NBS musicians and coaching given by Aria Borealis Bodø jury members. The second round (2 July) sees singers competing in teams that will perform lightly staged opera scenes with full orchestra.

“We have a truly international selection of winners, chosen from a strikingly wide group of performers,” notes Rasmus Adrian. "Aria Borealis Bodø is about giving our audience the best possible experience of the music and celebrate the joy that comes when people from around the world gather in a beautiful place to share what they care so much about.”

Camilo Delgado Diaz (29) is a tenor from Colombia, now living in The Netherlands. He was chosen for the Junges Ensemble’s 2020/2021 season at the Musiktheater im Revier in Gelsenkirchen, Germany. Performances include Keiser’s Octavia, Monteverdi’s Orfeo, and Vespro della beata Vergine. Diaz was a finalist at the 5th International Competition Pietro Antonio Cesti in Innsbruck and at the 2021 Corneille Competition in Rouen, France. He performed in Handel’s Alcina under Maestro Andrea Marcon as the winning tenor of the Voci Olimpiche competition in Vicenza, Italy. Camilo holds a Master’s degree in Baroque singing from the Hochschule für Musik in Cologne.

Soprano Johanna Rosa Falkinger (26) from Austria has performed as a soloist in orchestral concerts, oratorios and masses. She is a member of Momentum Vocal Music and regularly performs with the Company of Music at the Vienna Konzerthaus. Johanna has won prizes at the Corneille Competition in Rouen, France, and the WDR Prize at the H.I.F. Biber Competition in St. Florian, Austria with Ensemble freymut. She is currently a Master’s student in Early Music Singing at the MUK Music and Arts University in Vienna.

Paulina Francisco (29) is a soprano from the USA, now living in Canada. She has performed as a soloist with several ensembles, including the Indianapolis Baroque Orchestra, Bourbon Baroque, and the Bloomington Bach Cantata Project. She was a finalist in the 2021 Handel Aria Competition and she is in the final stages of completing a DM in Historical Performance at Indiana University. Additionally, Paulina holds a Graduate Certificate in Vocology from IU, a Master of Arts in Early Music from the University of Southern California and Bachelor’s degrees in Vocal Performance and Public Relations from Carroll University.

Megan Kahts (33) a mezzo-soprano from South Africa who now lives in Austria, has several years of experience performing as a soloist with orchestras and in opera productions. She made her debut at Vienna’s Musikverein in 2019 with the Lissy String Quartet. At an early age, Megan won 1st Prize at the 2008 Philip H. Moore Music Competition in Johannesburg, South Africa. Over the years she has won additional prizes, most recently at the Kammeroper Schloss Rheinsberg Festival Competition in 2019. Megan holds Master’s degrees in both Lied and Oratorium Singing and in Opera Singing. She is currently completing an additional Master’s degree in Historical Performance Practice at the University for Music and Performing Arts in Vienna.

Croatian countertenor Franko Klisović (27) was in his early studies when he was engaged as Ottone in Handel’s Agrippina at the Croatian National Theatre in Zagreb in 2016. He has performed regularly with orchestras and opera companies, including in Doha at the Katara Opera House and at the Croatian National Theater Ivan pl. Zajc in Rijeka. In the 2020/2021 season he performed the role of Nireno in Handel’s Giulio Cesare in Egitto in Rijeka. Franko has won numerous awards at international vocal competitions, including the Audience Prize at the Premiere Opera Foundation + NYIO in New York in 2020, and 1st Prize at the 2021 Tullio Serafin singing competition in Vicenza, Italy. He is currently pursuing a degree from the University of Zagreb Academy of Music.

British/Australian soprano Lauren Lodge-Campbell (29) performs regularly as a soloist with prominent ensembles, including Les Arts Florissants, English Chamber Orchestra, and Southbank Sinfonia. She is also a busy opera soloist and recent roles include Lole in Handel’s Hercules at the Händel-Festspiele in Karlsruhe and Proserpina/Ninfa in Monteverdi’s Orfeo with Les Arts Florissants. Lauren has received several awards over the years, including the Audience Prize at the 2018 Handel Singing Competition and the Schubert Society Song Prize at London Song Festival in 2017. She holds a Master’s degree from Guildhall School of Music and Drama in London.

Kieran White (32) from the UK is an established tenor/Haute Contre as soloist with leading European ensembles, including Amsterdam Baroque and the Edvard Grieg Choir in Norway. He performs regularly with the Monteverdi Choir under Sir John Eliot Gardiner and with Copenhagen Soloists. Recent operatic engagements include Castor in Castor et Pollux by Rameau with Warsaw Kamerlana, Poland; Damon in Handel’s Acis and Galatea with Dorset Opera, UK, and Ruggiero in Caccini’s La liberazione di Ruggiero at Brighton Early Music. Kieran received 2nd Prize at the 2021 Froville International Baroque Competition. He holds a Master’s degree from the Royal Academy of Music in London.