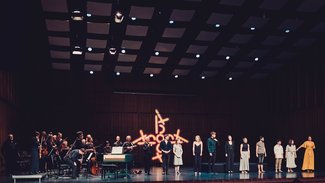 After nine days of large-scale musical meetings, concerts and two rounds of the international singing competition, it is clear that there are many winners at Aria Borealis Bodø: “There is simply such a high level among the participants that we are happy that there were several prizes to be awarded,” says Rasmus Adrian, CEO at Stormen Konserthus and Jury Chairman of the Aria Borealis Bodø International Competition for Early Music Singers.

The jury, the audience (both in the hall and online) and even the orchestras involved were able to choose their own winner of the competition, which took place in the Norwegian city just north of the Arctic Circle on Monday 27 June and Saturday 2 July. Austrian soprano Johanna Rosa Falkinger received the jury’s first prize in the first competition round, and British tenor/haute-contre Kieran White won the first prize in the second round. The complete prize list is as follows:

Talent development
The Aria Borealis Bodø International Competition for Early Music Singers started several months before the festival itself, with as many as 127 young singers signing up. After the initial digital rounds, eight participants from all over the world were finally selected to travel to Bodø in June to compete in two more rounds – with the added opportunity of further talent development.

Austrian soprano Johanna Rosa Falkinger commented on the competition: “I am extremely honoured that every orchestra selected me as their favourite and also very grateful for the jury’s first prize in the first round, especially because it is thanks to jury members Tuuli Lindeberg and Emma Kirkby that I found my way into Early Music four years ago. It was amazing to get the opportunity to present your own programme, working with a stage director and being accompanied by such great and renowned orchestras of the Nordic Baroque Scene. In Bodø I experienced a great atmosphere of co-working, inspiration, and making dreams come true!“

21-year-old Jorge Armando Martínez Escutia, from Mexico, also really enjoyed his experience in Bodø: “This is the dream. Meeting my idols like Emma Kirkby and performing professionally is fantastic. Additionally, we have received so much good guidance and training together with very skilled musicians, which is rare,” he says. He has also fallen in love with the midnight sun and the tranquillity he’s found in Bodø. “It's so beautiful here and I can really relax. I would have loved to live here,” he adds.

The Aria Borealis Bodø International Competition for Early Music Singers has been praised for creating an environment around the singers characterised by collaboration and development rather than stress and competition nerves. “This has been about working together and creating musical meetings enabling both the artists and musical interpretations to develop, and it is good to see that this is exactly what has happened. We have seen a great development among the singers through the competition rounds,” says Rasmus Adrian.

The whole world in Bodø
Bodø, long known for its breathtaking landscape, has seen its international profile soar since it was named a European Capital of Culture for 2024. Last week, the inaugural Aria Borealis Bodø gathered more than a hundred performers for workshops, sessions, concerts and even a summer program for young musicians. Performances included L’Arpeggiata and Christina Pluhar, lutenist Rolf Lislevand, star of Norwegian folk music Berit Opheim, bandoneon player Per Arne Glorvigen, and composer Maja Ratjke with Nordic Affect.

The festival has represented a pioneering collaboration between Bodø’s Stormen Culture Centre, a concert hall, library and multi-purpose performance space opened in 2014, and Nordic Baroque Scene, a network formed by the four prominent Nordic Baroque orchestras Concerto Copenhagen, Finnish Baroque Orchestra, Drottningholm Baroque Ensemble (Sweden) and Barokkanerne from Norway. According to the organisers, Aria Borealis turned out exactly the way they had hoped for. “We’ve succeeded in creating a musical meeting between musicians and singers from all over the world. My impression is that it has been very beneficial thanks to this innovative form of competition, where mentoring, collaboration with the orchestras and less competitive pressure has been central,” says Mari Giske from Nordic Baroque Scene.

Now they’ll start planning the next edition of the competition and festival, which will take place during Bodø's Capital of Culture year. “We aim to repeat the success in 2024 and I hope it can be even bigger. This could be an international summit of Baroque music,” says Giske. Rasmus Adrian is particularly pleased to have achieved this in Bodø: “There is no doubt that we have been able to show Norway at its best and made our mark as an important and accomplished cultural force in the region. We have created an international event here. Now I am tired, happy and proud.”