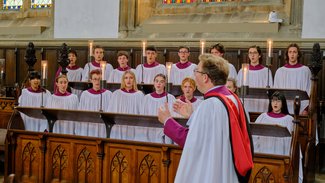 Sacred choral music from both sides of the Atlantic will travel with the Choir of Merton College, Oxford on its first tour since before the Covid pandemic. Merton’s choral scholars and their Director of Music Benjamin Nicholas are bound for the United States this autumn to perform at the New York City Church of St. Ignatius Loyola on Park Avenue (15 September 2022). Their itinerary opens with Choral Evensong given jointly with Harvard University Choir at the Memorial Church of Harvard University (11 September), followed by a concert (12 September), and also includes performances at Trinity Church on the Green in New Haven (13 September) and Princeton University Chapel (16 September).

“Touring is very important to us on so many levels,” comments Benjamin Nicholas. “Our university terms are quite short, so working together in a concentrated way outside those three eight-week periods is invaluable to the choir’s musical development. It’s also hugely important socially for this age group. I think any of our choral scholars would say that touring is one of the advantages of being in a collegiate choir. We’ve missed that enormously since we last toured in December 2018. The new generation of Merton singers, who joined us in autumn 2019, has never been on tour as a group. That makes this US trip doubly important.”

Nicholas has chosen works that bring out the best from his singers and are sure to connect with the choir’s American audience. His compelling programme includes the motet Senex pueram portabat and again (after ecclesiastes), respectively by New York-based composers Nico Muhly and David Lang. The latter work, a setting of Hebrew verses freely adapted by the composer from the Book of Ecclesiastes, unfolds as a short meditation on the strands of hope and futility woven into the pattern of natural and human cycles. The choir is also set to perform English sacred works with impeccable royal connections, chosen to mark the Platinum Jubilee of Queen Elizabeth II.

Merton College Choir’s concert bill opens with the Mass in G minor by Ralph Vaughan Williams, the Creed from which was performed at the Queen’s coronation service in 1953. O Lord, make thy servant Elizabeth and Jehova, quam multi sunt hostes mei, majestic masterworks by William Byrd and Henry Purcell, evoke the golden age of music from England’s Chapel Royal. They are prefaced by Ave Regina caelorum, originally written in 2014 by today’s Master of the Queen’s Music, Judith Weir, to celebrate the 750th anniversary of Merton College and included in the Merton Choirbook, a compendious collection of new choral compositions. The royal theme runs through the programme’s second half in the form of Bring us, O Lord by William Harris, organist of St George’s Chapel Windsor, who taught piano to the young Princess Elizabeth and was assistant conductor at her coronation, and Hubert Parry’s I was glad, performed at every coronation since Edward VII’s in 1902.

Nicholas and his choir recorded an album of contemporary American music shortly before the pandemic began. It is scheduled for future release on the Delphian label. “We haven’t had the chance to sing our new American repertoire in concert, so I chose two representative, neatly contrasting pieces from the recording for our tour,” comments Merton’s Director of Music. “The Muhly and Lang works make a very good fit with the rest of the programme.”

The next Merton College Choir album, scheduled for release by Delphian on Armistice Day, 11 November 2022, couples Ian Venables’ Requiem with anthems for choir and orchestra by Herbert Howells. Venables added orchestral parts to his Requiem setting, first performed two years ago with organ accompaniment, which receives its debut recording here in company with the world premiere recording of his anthem God be merciful. The album also includes the first recording of Howells’ The House of the Mind in its version for choir and orchestra, and premiere recordings of newly orchestrated versions of O pray for the peace of Jerusalem and Like as the hart desireth the waterbrooks.

“This is an exciting time for Merton College Choir,” says Benjamin Nicholas. “We’re busy making recordings and looking forward to our tour to the States. This is on top of our regular work of singing Evensong every Tuesday, Thursday and Sunday in Merton Chapel. This will be the choir’s fourth tour to the USA since its formation in 2008. I know from past experience that they are a great way to build morale, raise standards and reach new audiences.”

The information in this press release was correct at the time of sending. Please check the choir’s website and social media for the latest updates.