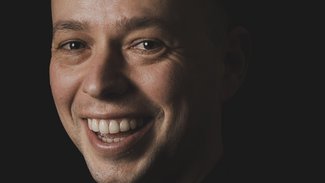 [His] music swirls, hums, and draws us inexorably into the dark heart of power

Luke Styles marks his 40th birthday year with Tracks in the Orbit, new saxophone concerto for Iain Ballamy, and Voices of Power for this summer’s Three Choirs Festival

There’s something about the music of Luke Styles that inspires critics to coin eye-catching comments. The British and Australian composer’s works have been described as everything from ‘aggressively trendy’, ‘elegantly creepy’ and ‘defiantly cool’ to being ‘made with great care and a ridiculous amount of talent’. This year, his fortieth, sees the addition of two major new concert works to the Styles catalogue. Tracks in the Orbit, a saxophone concerto for jazz legend Iain Ballamy, is set to receive its first performance at Cardiff’s BBC Hoddinott Hall on 29 April 2022, while the world premiere of Voices of Power, a Three Choirs Festival commission for contralto soloist, choir and orchestra, is scheduled to follow at Hereford Cathedral on 28 July.

Tracks in the Orbit will be performed by Iain Ballamy, the BBC National Orchestra of Wales and conductor Fiona Monbet. The work, co-commissioned by BBC NOW and the Tasmanian Symphony Orchestra, will receive further outings later in Tasmania and in company with the Brittany Symphony Orchestra. Hilary Summers, the Three Choirs Festival Youth Choir and the Philharmonia Orchestra under conductor Samuel Hudson, meanwhile, are ready to bring Voices of Power to life this summer.

Luke Styles’s saxophone concerto inhabits the intersection between classical contemporary idioms and jazz, territory he explored often in earlier works and during his teenage days as a jazz bassist. The composer first met Iain Ballamy in 2014. They bonded over Emulsion, the new music festival Styles created with jazz saxophonist Trish Clowes. “We brought together Trish’s band Tangent, Iain’s band Food and my contemporary music group Ensemble Amorpha,” he notes. The two men remained in touch. After receiving a newsletter from the composer about his forthcoming stage works, Ballamy responded with a challenge. “Iain messaged me to say, ‘Enough of this opera stuff – how about a concerto?’ I took him seriously so we looked for ways to make it happen. BBC NOW were very keen on the idea and on working with Iain, so it grew from there.”

While the solo part of Tracks in the Orbit is written out, it grants licence to the soloist to improvise in places and embellish the music as the mood dictates. The work’s title and ethos was inspired by Styles’s reading of Hamlet’s Mill, an extended essay from 1969 about the primeval origins of human knowledge and its proposed transmission through myth. The controversial book enters the speculative realm of archaeoastronomy in search of the relationship between mythology and the repeating patterns and periodic changes observable in the night sky.

Luke Styles was also influenced by a conversation with Iain Ballamy about ‘devotional music’ rooted in ritual. Styles structured ‘Devotion’, his concerto’s second movement, around a cantus firmus and made use of Olivier Messiaen’s eight-note Mode 6 scale, one of the French composer’s so-called modes of limited transposition, here and elsewhere in the piece. “Tracks in the Orbit is about ‘Hamlet’s Mill’ turning and the planets grinding their tracks in the heavens,” the composer comments. “The idea of this ancient knowledge of the night sky certainly feels connected to the music, even if it’s hard to say exactly how.”

Voices of Power, to a libretto by poet and author Jessica Walker, contemplates the nature of power across the centuries. Its six protagonists include figures as diverse as Boudica and Elizabeth I, Catherine the Great and Margaret Thatcher, Eleanor Roosevelt and Jacinda Ardern. “Our intention was to examine different aspects from power seen from the perspective of powerful women,” notes Luke Styles. “We look at powerful women conforming to a classic male stereotype: Margaret Thatcher, for example, lowered her voice to sound more authoritative, like a man. That downward shift in pitch will be quite clear and playful in the music. Boudica and Elizabeth I illustrate the violent use of power, but we look more at Elizabeth’s single-minded rejection of family and relationships. It ends with aspects of power that are more collaborative, compassionate and long term in their application, what we probably need from our leaders if we’re going to survive into the future.”

Voices of Power stands as a natural successor to Styles’s hour-long symphonic song cycle for bass-baritone, chorus and symphony orchestra, No Friend But The Mountains (2020). Composing the latter, he notes, delivered invaluable lessons on how to write effectively for chorus, on dramatic pacing, when to insert orchestral interludes, and how to develop the trajectory of one solo voice over the course of a long piece. His Three Choirs Festival score was written for choristers aged fourteen to twenty-five, talented young singers ready to take and hold the spotlight, and for a soloist he first heard while working as an usher at Wigmore Hall.

“I was captivated by Hilary Summers from that moment,” recalls Luke Styles. “It’s great now to be able to write for a voice of such extraordinary power and range. Her contralto straddles four octaves and defies traditional gender classifications. It touches the baritone register usually associated with male singers but also reaches to the top of the mezzo-soprano range, which you’d normally expect to hear a woman sing. There’s this chameleon-like presence to her singing which I find fascinating and fun. I want to play with that in Voices of Power as part of a piece that belongs to the great choral tradition of the Three Choirs Festival.”

Luke Styles is a British and Australian composer, represented by Linda Marks and published by G.Schirmer/Wise Music. Luke was the first Glyndebourne Young Composer in Residence and the first composer in residence at the Foundling Museum since Handel. He is currently Musician in Residence with the British Council in Brazil. Luke’s operas have been performed on the famous Glyndebourne main stage, and the Royal Opera House Covent Garden by the London Philharmonic Orchestra under the baton of conductors such as Vladimir Jurowski.

Luke’s first Australian opera Ned Kelly premiered to critical acclaim at the 2019 Perth Festival and his latest opera Awakening Shadow premiered in 2021 at the Cheltenham Music Festival, Presteigne Festival and will receive a second production by Sydney Chamber Opera in 2022. Luke’s recent symphonic song cycle No Friend But The Mountains premiered at the Sidney Myer Music Bowl in Melbourne in March 2021 and has since been turned into a 2-part ABC TV documentary. His 2018 cycle On Bunyah, written for Mark Padmore and the Britten Sinfonia setting poetry by Les Murray, premiered at the Wigmore Hall, London followed by a UK tour and performances in Australia, where it was described as “Styles’s On Bunyah is magnificent and just like the poem is raw, not polite.” – The Australian. On Bunyah received a high commendation in the 2019 Paul Lowin Prize.

Luke is currently working on a Saxophone Concerto for the BBC National Orchestra of Wales, the Brittany Symphony Orchestra and the Tasmanian Symphony Orchestra. In 2022 Luke will compose two major vocal works, an Oratorio, Voices of Power, for the Three Choirs Festival, Philharmonia Orchestra and soloist Hilary Summers, and a song cycle for the French ensemble Le Balcon for premiere in Paris and at the Lille Opera. Looking further ahead Luke will compose orchestral works for European and Australian orchestras, including a new work for the Sydney Symphony Orchestra in 2023 as part of their 50 Fanfares Project. He currently has 2 new operas in development for partnerships between European, American and Australian opera companies.

Luke undertook his composition training with a Bachelor of Music (composition) degree at the Royal Academy of Music London and then went on to postgraduate studies with Wolfgang Rihm at the Hochschule für Musik Karlsruhe, Germany, with George Benjamin at King’s College London and with Detlev Müller-Siemens at the Universität für Musik und darstellende Kunst Vienna. In 2016 Luke completed a PhD at Trinity Laban Conservatoire of Music and Dance.

Throughout his career Luke has been heavily involved in creating collaborative and multi-discipline works. These have included works for dancers and circus performers, in the form of Handspun, commissioned by the Royal Opera House Covent Garden and subsequently produced in Oslo, Helsinki, Prague, London and Panama City. Luke has created silent-film scores for the British Film Institute and works for musicians and actors for Kings Place and the Werkraum Festival in Germany.