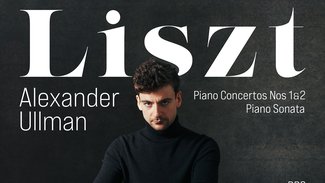 Victory in the world’s foremost Liszt competitions, one in Budapest, the other in Utrecht, set the foundations for Alexander Ullman’s subsequent career. The 30-year-old British pianist has chosen three landmark works by the composer for his latest album, a compelling combination of Liszt’s Piano Concertos Nos.1 & 2 and the monumental Piano Sonata in B minor. The recording, set for release on Rubicon Classics on 24 June 2022, documents interpretations that have evolved over more than a decade and project the strong feelings and associations that each piece holds for its performer.

“This album is a declaration, bold and unapologetic, of my relationship with Liszt as it is now,” notes Alexander Ullman. “I’ve always felt a closeness to the man and his music. There’s something life-affirming about the emotional landscape of these pieces. At the same time, they’re full of human contradictions, contrasts and transformations. Liszt, as a composer and as a person, was a maverick who also held the deepest respect for art and for the work of the great composers who preceded him. It’s this marriage of the profound with the irreverent, of innovation with tradition, that I find irresistible. I think of this recording as my ‘Liszt statement’, a chance to reflect on how each of these pieces resonates with me and on their incredible breadth of emotions.”

The two concertos were recorded with the BBC Symphony Orchestra and Andrew Litton at Maida Vale Studios. The album, produced by Andrew Keener, underlines Liszt’s debt to Beethoven in the gravity of the musical gestures and attention to detail present in each of its works. It also strikes a fine balance between the expressive spontaneity and deep thought behind the meaning of every note and phrase.

“It’s not a Romantic free-for-all,” says Alexander Ullman. “These three pieces have improvisatory aspects but are definitely not improvisations. Liszt spent decades revising and refining them. He rattled off many pieces, but these are not among them. He agonised over their composition for years, concocting thematic ideas long before finishing their scores.”

“The First Concerto and the Sonata are extraordinary explorations of Romantic sonata form, among the greatest examples of their time,” observes Ullman. “All three works are radical single-movement compositions, ground-breaking in so many ways. I’m attracted to things that have deep layers of meaning beneath the surface. You feel that every note of the concertos and the Sonata reflects the complexities of Liszt’s character. There’s something about this music and its emotions that I feel able to channel. Liszt is always searching, always ready to transform who he is and to transform his music. I love that openness and aspire to it myself.” 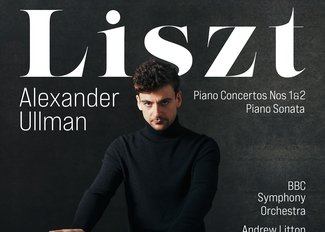