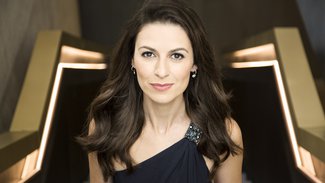 A house favourite at Vienna’s Staatsoper, where she has sung over 120 performances in the past decade, Chen Reiss draws deep inspiration from the city that Beethoven called home. The Israeli soprano, praised by Gramophone for her ‘supple, vernal lyric-coloratura’, is set to celebrate the 250th anniversary of the composer’s birth with a new recording of his concert arias and orchestral songs on the Onyx Classics label, titled Immortal Beloved. The album presents unfamiliar arias from Beethoven’s earlier career, displaying his yearning to find his muse, both as man and musician, and it will be released to coincide with Chen Reiss’s appearance as Marzelline in the Vienna Staatsoper’s first production of Leonore (1, 5, 8, 11 & 14 February 2020). Her Beethoven odyssey begins at the Barbican Centre on 2 October 2019 with the complete incidental music to Goethe’s play Egmont, performed with the Academy of Ancient Music and Richard Egarr and actor Stephen Fry as the narrator.

Chen Reiss made her latest album in London this summer with Egarr and his period-instrument band. Its programme comprises little-known works such as the concert aria ‘Primo amore’, written originally to a German text in Bonn around 1790 and later adapted to Italian words, and the scena and aria ‘No, non turbarti’ from 1802. It also includes the dramatic scena ‘Ah! perfido’, first performed in Leipzig in 1796 by Mozart’s friend Josepha Duschek; the lieder ‘Die Trommel gerühret’ and ‘Freudvoll und leidvoll’ from Beethoven’s Egmont music; a mood lightener in the form of ‘Soll ein Schuh nicht drücken’, composed in 1796 for Ignaz Umlauf’s Singspiel Die schöne Schusterin; and ‘O wär' ich schon mit dir vereint’, Marzelline’s aria from Fidelio.

‘Primo amore’ transported Reiss back to the first time she fell in love. “I was seventeen, not much younger than Beethoven was when he wrote the piece,” she recalls. “I remember where and when it was, the light, even the smells. The euphoria lasted a few months, then came heartbreak. This was the emotional key to a piece that reminded me so much of my own life, and to ‘Ah! perfido’. There’s something so vulnerable about those early pieces, which seem to foretell the suffering that Beethoven experienced in later years. They speak to me in such a personal way.”

Chen Reiss’s discography includes two earlier releases for Onyx Classics: Liaisons, an album of concert arias by Mozart, Haydn, Cimarosa and Salieri, and Le Rossignol et la Rose, a recital of songs by everyone from Purcell to Pauline Viardot, Mahler to Meyerbeer. “It’s seven years since Le Rossignol et la Rose,” she notes. “I decided to wait before recording Beethoven. In the interval, I got married and had two children. Of course that was life changing for me. I continued singing all that while, so have been very busy as mother and musician. I needed to create the time and mental space for another big recording project, which is why I waited for the right moment. By then I knew I wanted to devote it to Beethoven. I came to him quite late, after singing Mozart, Haydn, Handel and so much Classical and Baroque music, as well as Berg and Richard Strauss, Donizetti and Italian bel canto opera.”

Her first Beethoven performance was of the dramatic oratorio Christ on the Mount of Olives. She recalls immediately falling in love with the music and its composer. “I thought there was little Beethoven to suit my voice before that. He has this reputation as someone who wrote music which is vocally very challenging for singers. But I found the solo part in Christ on the Mount of Olives was the ideal match for me.” She subsequently sang Marzelline in Fidelio for the Vienna Staatsoper and the Ninth Symphony, most recently at this year’s televised Bastille Day ‘Concert for Paris’ beneath the Eiffel Tower, before deciding to record Beethoven’s songs and concert arias.

“I was ready vocally, ready emotionally for the pieces on my Beethoven album, and feel grateful to have made it with Richard Egarr and the Academy of Ancient Music,” observes Chen Reiss. “It’s been a joy to record with them. I was not sure what I could bring to ‘Ah! perfido’, which is associated today with heavy, dramatic voices. But the drama is there in the orchestral writing, which invites you as soloist to think like an instrumentalist and respond to everyone around you.”

Reiss looks forward to resuming her partnership with the AAM and its Music Director at the Barbican in October. She has already performed Egmont on tour in Germany and in Zurich and Bologna, with Thomas Quasthoff as narrator. “It shows Beethoven’s great sense of drama and the way in which he describes emotions through music. Klärchen’s songs are only a small part of what Beethoven wrote for the play but they are important to it.”

Both Egmont and Leonore were written for and first performed in Vienna. The city’s place in music history, notes Chen Reiss, has been a source of inspiration to her for many years. She begins her season at the Staatsoper as Ginevra in Handel’s Ariodante (8, 11, 13 & 15 November) and unfolds with Leonore in February. “The Staatsoper’s inaugural production of Leonore is very exciting, especially as Marzelline has more music than she does in Fidelio,” she observes. Reiss returns to the company to sing Sophie in Der Rosenkavalier (13, 16 & 19 April) and Marzelline in Fidelio (22, 25 & 28 April, 2 May). Reiss will also collaborate in Beethoven with regular partner Orchester Wiener Akademie, singing arias from her recording at the city’s Jeunesse series (23 November 2019) and her first performances of the Missa Solemnis at venues across Austria (15-19 July 2020).

Other 2019-20 season highlights include collaborations with Zubin Mehta in Mahler’s Second Symphony for the conductor’s farewell concert with the Israel Philharmonic Orchestra in Tel Aviv (20 October), and her debut with the Los Angeles Philharmonic in New Year’s Gala concerts. Mahler’s Second Symphony is also on the programme for her performances with the Symphony Orchestra of the Gran Teatre del Liceu and Josep Pons in Barcelona (1 March 2020) and the Rotterdam Philharmonic and Lahav Shani (14 & 15 May 2020 in Rotterdam, 17 May in Cologne).

Chen Reiss speaks of her need to disconnect from the relentless distractions of modern media and the value of freeing the mind. Being close to the natural world and, above all, to water provides the necessary breathing space. “I come from a small city in a relatively small country,” she explains. “Everything about it is different to Europe, the temperature, the air, the light. I feel very fortunate that as a child I had daily contact with the sea, the sun and with nature. The water and the beach were nature to me. This is part of me, and why I need to be close to water. I also see how important it is for my children, especially as we spend so much of our time together in cities. Going back to nature is essential for me.”

While her busy international schedule and the demands of motherhood rule out regular teaching commitments, Chen Reiss often leads masterclasses with young singers. “I think it’s important to be generous with your knowledge, especially with younger people,” she comments. “When they ask about becoming professional singers, I tell them not to look up to those who are more successful or down at those who have not been as successful; rather, I tell them to look inside. Try to find your strengths and discover you own path. It’s not possible to copy the success of another. Creativity for me comes not just from making music but also from how you find your path in life.”