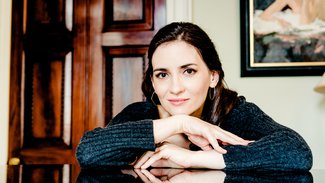 Ivana Gavrić celebrates depth and humanity of her cultural heritage in new album for Rubicon Classics. Pianist’s autobiographical programme includes Haydn’s evergreen Piano Concerto No.11 in D major, the world premiere recording of Cheryl Frances-Hoad’s Between the Skies, the River and the Hills and compelling homages to Haydn and her birth city, Sarajevo.

Europe’s boundless cultural connections and ceaseless creative energy stand at the heart of Ivana Gavrić’s latest album. Origins, set for release on 27 September 2019 on Rubicon Classics, knits together her cultural and musical heritage. It includes the world premiere recording of Cheryl Frances-Hoad’s new piano concerto, Between the Skies, the River and the Hills, made with the Southbank Sinfonia conducted by Karin Hendrickson. The album also comprises Haydn’s Piano Concerto in D Hob. XVIII:11, homages to Haydn for solo piano by six French composers – Ravel, Debussy, Dukas, D’Indy, Hahn and Widor – presented together with Frances-Hoad’s own Haydn homage Stolen Rhythm, as well as her arrangement of the traditional Bosnian song Kad ja podjoh na Bentbašu (When I went to Bentbaša).

“Origins has been in the making for many years,” observes Ivana Gavrić. “And it has grown many layers as it developed. Over time I’ve learned to look at myself and understand what drives me. Everything came together at the right time for me to make this recording about influences and heritage, especially my own heritage. There’s a nod to Bosnia’s Ottoman past through folk song, to its time under Austro-Hungarian rule through Haydn, to my life in Britain through Cheryl’s concerto, and to my love for the music of Ravel and Debussy. The music I play on the recording reflects origins and relationships that meander through my own life and have shaped it naturally, akin to how a river shapes its environment.”

The album’s genesis, she recalls, began about eight years ago when she attended a performance of Haydn’s Piano Concerto No.11 in D at the Royal Festival Hall. While reading the programme notes, Gavrić was struck by the suggestion that the concerto’s Rondo all’ungarese finale was actually thought to contain a Croatian or Bosnian folk melody. “I wanted to learn more, and have been searching for the right moment and opportunity to explore it further ever since.”

Thoughts of Haydn’s concerto surfaced again when Ivana Gavrić recorded Cheryl Frances-Hoad’s Homages, seven short lyric pieces influenced by everyone from Grieg and Janáček to Mendelssohn and Haydn. The latter, Stolen Rhythm, originally belonged to a collection of pieces by six British composers commissioned to mark the bicentenary of Haydn’s death in 2009. These works were a response to six French composers who were invited to do the same a hundred years earlier, in 1909, on a given motive based on Haydn’s name. Gavric realised she had found the perfect kernel of an idea to grow and to inspire her, culminating in this weave of her musical and cultural heritage.

Frances-Hoad crossed Gavrić’s repertoire radar during their student days at the University of Cambridge. “Within my first few weeks in Cambridge people said, ‘Look out for Cheryl Frances-Hoad – she’s a terrific composer’. We became friends and while preparing my Grieg recording, I asked Cheryl if she would write a homage to Grieg. Cheryl is full of really good, really witty ideas, always delivered in a direct and clear way. She composed something wonderful, of course, and it was very well received. It provided an ideal and natural opportunity to programme contemporary music together with pieces by the composers behind each of the homages. So I jumped at the chance to continue our collaboration.”

Gavrić was eager to commission a bigger work from Frances-Hoad, and she invited her to return to Haydn, this time to create a keyboard concerto in homage to the composer. The new piece, she explained, could grow from the legend of the D major Piano Concerto’s ‘Bosnian/Croatian’ finale and play with the work’s blend of musical wit and lyrical beauty. “I don’t believe the theory that the themes used by Haydn were Bosnian/Croatian for a second,” notes Gavrić. “But the connection between classical music and my cultural origins inspired me to create something that reflected these intertwining threads, and commission Cheryl to write a concerto, which the Southbank Sinfonia made possible. Sarajevo is a small city and yet it is a melting-pot of cultures, nationalities, architecture, arts, history and humour! The region’s culture is incredibly rich and diverse. I want to celebrate this. It is my heritage. It becomes stronger as I’ve grown older and had children. And I believe it is an important contrast to the often dominant associations with war.”

I have Janáček and other Eastern European composers, as well as Grieg, to thank for teaching me to fully appreciate the power of folk music. Playing their works, which were infused with their respective countries’ folk melodies and rhythms, I realised just how this music speaks directly to the heart. It crosses national boundaries and breaks down barriers between different people as it deals with basic human emotions that we all feel. Somehow I instinctively knew how to play this music, even though it wasn’t based on ‘my’ folk music. I suddenly understood its power: we have so much to learn from it.”

Ivana Gavrić notes how Kad ja podjoh na Bentbašu mirrors the many layers of Bosnian culture. The original song was probably brought to Bosnia by Sephardic Jews, grafted to the plaintive melody of a Turkish march and absorbed into the region’s popular sevdalinka genre. It became an anthem for Sarajevo. Kad ja podjoh na Bentbašu tells of a young man who doesn’t fulfil his promise to return to his beloved in the evening, and the next day discovers that she has married another, in his absence. “It’s very poignant, and has a profound message saying, ‘take your chances, life is short, carpe diem’! I asked Cheryl to include this melody in the concerto because it’s so instantly recognisable, so well-loved, and expresses this urge to enjoy life so directly.”

Origins invites listeners to challenge stereotypes about everything from Haydn’s wit and humour to the history of Bosnia. “Part of this project is about breathing new life into music from the past,” concludes Ivana Gavrić. “Cheryl has also written new cadenzas for the Haydn concerto which are based on this Bosnian folk song, so now I have made sure that there is a recognisable melody from my part of the world in this concerto! And above all, of course, there’s the personal thread that runs through this recording.”

Cheryl Frances-Hoad Piano Concerto Between the Skies, the River and the Hills

Recorded with the support of the hibou Stiftung, Arts Council England and the Fidelio Trust.