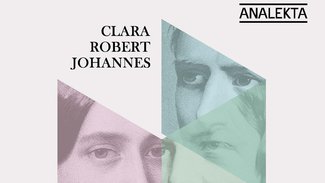 Clara, Robert, Johannes – Darlings of the Muses launches four-volume cycle with album of Clara Schumann’s A minor Piano Concerto and the first symphonies of Robert Schumann and Johannes Brahms

Powerful emotions resonate throughout Clara, Robert, Johannes, a compelling new series of recordings made by Canada’s National Arts Centre Orchestra. The cycle’s first volume, set for UK release on 28 August 2020 on the Analekta label, explores the closely intertwined personal and artistic connections between three musical giants: Clara Schumann, Robert Schumann and Johannes Brahms. The album’s programme comprises the young Clara’s Piano Concerto in A minor Op.7, a work of formidable strength and eloquence, and Robert and Johannes’ first symphonies. Grammy Award nominee and recipient of the 2018 Heidelberger Frühling Music Prize, Venezuelan virtuoso Gabriela Montero features on the recording, performing both as soloist in the concerto and also improvising scintillating interludes on themes by Clara between the concerto and each symphony.

Clara, Robert, Johannes – Darlings of the Muses follows Analekta’s digital-only teaser, issued last September to mark the 200th anniversary of Clara Schumann’s birth. The album is the first of four scheduled for release over the next two years, each programmed to highlight aspects of the relationship between Clara,her husband Robert Schumann and their protégé Johannes Brahms. The NAC Orchestra’s Music Director, Alexander Shelley, worked with Clara Schumann scholar Julie Pedneault-Deslauriers and Brahms biographer Jan Swafford to illustrate the lives and works of the three composers. Robert Schumann and Johannes Brahms’s symphonies are paired and combined with Clara Schumann’s chamber works and extant orchestral pieces, including several rare and special gems.

“I have always loved these symphonies and saw many links between them,” observes Alexander Shelley. “It was a real pleasure performing them with this Orchestra in 2016, and it has always been my dream to record and release them together. No story of these two composers is complete without Clara, much more famous in her lifetime than her husband, and a strong influence on both Robert and Johannes. We crafted this vision with Clara Schumann scholar Julie Pedneault-Deslauriers, to combine the symphonies with pieces by Clara in ways that provide an insightful narrative to the intertwined lives and works of these three Romantics.”

Alexander Shelley became Music Director of the NAC Orchestra in September 2015; he is Principal Associate Conductor of the Royal Philharmonic Orchestra and was Chief Conductor of the Nuremberg Symphony Orchestra 2009–2017. Since being awarded first prize at the 2005 Leeds Conducting Competition, Mr. Shelley has been in demand from orchestras around the world, including the Philharmonia, Rotterdam Philharmonic, Mozarteum Orchester Salzburg, DSO Berlin,Leipzig Gewandhaus, CzechPhilharmonic, Orchestre de la Suisse Romande, Orchestra Svizzera Italiana, Stockholm Philharmonic, Oslo Philharmonic, Simón Bolívar, Seattle, and Houston Symphony Orchestras. He is a regular guest with the top Asian and Australasian orchestras. The Clara, Robert, Johannes release with the NAC Orchestra follows Life Reflected, ENCOUNT3RS, New Worlds, and The Bounds Of Our Dreams.

Award-winning and bestselling recording artist, Gabriela Montero was nominated for a Grammy Award for her album ‘Baroque’ in 2008. Her most recentalbum, released in autumn 2019 on the Orchid Classicslabel, features her own “Latin” Concerto recorded with the Orchestra of the Americas. Recipient of the 2018 Heidelberger Frühling Music Prize, Montero has been celebrated for her exceptional musicality and ability to improvise, and has performed with many of the world’s leadingorchestras to date,including the RoyalLiverpool Philharmonic, Rotterdam Philharmonic, Vienna Radio Philharmonic, and Netherlands Radio Philharmonic orchestras; the Gewandhausorchester Leipzig, NDR Sinfonieorchester Hamburg, NDR Radiophilharmonie Hannover, Zürcher Kammerorchester, Academy of St Martin in the Fields, and Australian ChamberOrchestra.

ABOUT THE NAC ORCHESTRA

The NAC Orchestra was formed 51 years ago at the creation of Canada’s National Arts Centre and gives over 100 performances a year with world-renowned artists. It is noted for the passionand clarity of its performances and recordings, its ground-breaking teaching and outreach programs, and the nurturing of Canadian creativity. In 2015 Alexander Shelley began his tenure as Music Director, following Pinchas Zukerman’s 16 seasons at the helm. In addition to a full series of subscription concerts at the National Arts Centre each season, the Orchestra tours throughout Canada and around the world.

The NAC Orchestra has recorded many of the 80+ new works commissioned since its inception, for radio and on over 40 commercial recordings. These include Angela Hewitt’s 2015 JUNO Award-winning album of Mozart Piano Concertos; the groundbreaking Life Reflected, which includes My Name is Amanda Todd by Jocelyn Morlock, winner of the 2018 JUNO for Classical Composition of the Year; and from the 2019 JUNO nominated New Worlds, Ana Sokolović’s Golden SlumbersKiss Your Eyes, 2019JUNO Winner for Classical Composition of the Year. The NAC Orchestra was nominated for a 2020 JUNO for Classical Recording of the Year, Large Ensemble for The Bounds of Our Dreams, which includes le Concerto de l’asile by Walter Boudreau and performed by Alain Lefèvre.

THANK YOU TO OUR PARTNERS