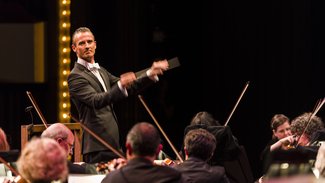 When the world pressed the great pandemic pause button last year, Canada’s National Arts Centre Orchestra used the time to reflect on its values and plan for its post-Covid future. Decisions made during the enforced break from public performance are reflected in the fresh layers of creative work embedded in the organisation’s 2021-22 season. The NAC Orchestra signalled its intent shortly before returning to public performance with four specially commissioned multimedia pieces, made for streaming and television broadcast. UNDISRUPTED, first presented online in August, offered a rich foretaste of a season hallmarked by its range, imagination and diversity.

“The 2021-2022 season will undoubtedly be different from any of our past seasons,” observes the NAC Orchestra’s Music Director Alexander Shelley. “The idea of coming back together, of sharing space and sound, is now more important than ever. Music is about the communal experience, about coming into a space in the spirit of shared humanity, where we experience the enjoyment of storytelling. That, for me, is something extremely special and valuable. This year, we offer inspiring collaborations with diverse composers and young artists, and we will continue our efforts to share our music with as many Canadians as possible.”

UNDISRUPTED comprises works by leading Canadian artists. Each episode marries strong stories to mixed-reality digital effects and music performed by guest soloists and members of the NAC Orchestra under Alexander Shelley. Soprano Measha Brueggergosman’s contribution took the form of a documentary exploring her Black Loyalist roots in Nova Scotia and the lives of inhabitants of Africville, a small community of mainly Black Canadians settled by former slaves in the early 1800s. Serbian-born composer Ana Sokoloviċ’s Iskra, a thirty-minute symphony, sets the Covid-19 pandemic in context with other major events in human history, while Montreal-based composer and filmmaker Nicole Lizée’s A Guide to the Orchestra creates a magic realist tale of a mysterious character attending a NAC Orchestra rehearsal. Mohawk and Two-Spirit singer-songwriter Shawnee Kish’s Music is My Medicine presents the fruits of her collaboration with young indigenous artists who have never before performed on stage.

The NAC Orchestra’s in-person and online audiences have already experienced and continue to look forward to a thoroughly engaging blend of familiar and new works this season. The programme has already included performances by violinist and Artist-in-Residence James Ehnes (18 September 2021) who will return next spring (5, 13 and 14 April 2022); the long-awaited return of Hélène Grimaud as soloist in Robert Schumann’s Piano Concerto (7 October 2021); violinist Leila Josefowicz in concert with the NAC Orchestra’s Principal Guest Conductor John Storgårds (21 October 2021); and audiences look forward to Handel’s Messiah, conducted by the leading specialist in Baroque and Classical repertoire Bernard Labadie (15 & 16 December 2021). This season has seen the launch of NACO Playlist, a new series of in-person and livestreamed concerts in which guest artists and orchestra members share their favourite classical music playlists.

Jake Heggie’s Songs for Murdered Sisters, co-commissioned by the NAC Orchestra and Houston Grand Opera, is set to receive its world premiere performance in the version for voice and orchestra on 23 February 2022. The song cycle, to eight new texts by Margaret Atwood, was written for baritone Joshua Hopkins, whose own sister was one of three women killed in their homes by a vengeful ex-partner. The work stands as a memorial to the particular murder victims and a reminder of the universal extent of violence against women.

The NAC Orchestra’s long-term vision is set to embrace the diversity of Canada’s population, to fully realise its mission and mandate as a truly national orchestra. “After the pandemic and the hiatus of eighteen months without performing to an audience in person, we wanted to return in a different light,” comments Arna Einarsdóttir, Managing Director of the NAC Orchestra. “We’ve used this time to explore what the future holds for the artform and for our organisation.”

Those deliberations were informed by recent shifts in society and the growing awareness they have raised of ingrained inequalities and iniquities. “This is why we chose to launch our season with UNDISRUPTED,” recalls Einarsdóttir. “We were fortunate to have the financial support to invite four visionary female artists, with whom we already had strong working relationships, to make these programmes. We gave them the orchestra, a TV crew and digital designers, and called on them to give their artistic response to our age by using the orchestra as their megaphone. We were determined to push the boundaries of how orchestral music is presented, using the digital medium to its full extent.”

In addition to its season at Ottawa’s National Arts Centre, the NAC Orchestra makes a welcome return to Carnegie Hall on 5 April 2022. The concert will be given in memory of the Canadian-born American journalist Peter Jennings, anchor of ABC World News Tonight for more than thirty years until his death in 2005. His family commissioned Philip Glass to write his Symphony No.13 for the NAC Orchestra. The new work, inspired by Jennings’ enduring reputation as purveyor of trusted news, offers a meditation on the theme of truth in our times. Alexander Shelley has chosen to pair Glass’s composition with Shostakovich’s Symphony No.9, completed weeks after the end of the Second World War, later condemned for its ‘ideological weakness’ and dismissed as an inappropriate response to the great sacrifice made by the Soviet people in the war against Nazism.

This season and in seasons to come, the NAC Orchestra aims to connect with the widest possible constituency and strike roots within multiple communities. Its key priorities include striving for the highest artistic standards, supporting emerging talent and encouraging new voices, establishing a creative dialogue, and underlining the essential importance of live music. “We feel that nothing should be beyond the boundaries of our creative dialogue,” notes Arna Einarsdóttir. “That is at the heart of what we are doing this season and in future.”

ABOUT THE NAC ORCHESTRA

Since its debut in 1969, the National Arts Centre (NAC) Orchestra has been praised for the passion and clarity of its performances, its visionary educational programs, and its prominent role in nurturing Canadian creativity. Under the leadership of Music Director Alexander Shelley, the NAC Orchestra reflects the fabric and values of Canada, reaching and representing the diverse communities we live in with daring programming, powerful storytelling, inspiring artistry, and innovative partnerships.

The NAC Orchestra has recorded many of the 80+ new works commissioned since its inception, mostly from Canadian composers, for radio and on over 40 commercial recordings. These include Angela Hewitt’s 2015 JUNO Award-winning album of Mozart Piano Concertos; the groundbreaking Life Reflected, which includes My Name is Amanda Todd by Jocelyn Morlock, winner of the 2018 JUNO for Classical Composition of the Year; from the 2019 JUNO-nominated New Worlds, Ana Sokolović’s Golden Slumbers Kiss Your Eyes, 2019 JUNO Winner for Classical Composition of the Year; the 2020 JUNO-nominated The Bounds of Our Dreams featuring pianist Alain Lefèvre, and Clara - Robert - Johannes: Darlings of the Muses, released in 2020.

The NAC Orchestra reaches a national and international audience through its online streaming, touring, recordings, and leads a significant Music Education and Community Engagement department, whose volume of activities parallels that of its performance and artistic creation activities. In response to the Covid-19 pandemic, the Orchestra adapted introducing various new programs (NACO at the Fourth), audio and video series (NACO Home Delivery, NACO Lunch Breaks, From NACO with Love), and lively online interviews led by Music Director Alexander Shelley (Musically Speaking).

Alexander Shelley began his tenure as Music Director of the NAC Orchestra in 2015, following Pinchas Zukerman’s 16 seasons at the helm. He is Principal Associate Conductor of the Royal Philharmonic Orchestra and former Chief Conductor of the Nuremberg Symphony Orchestra (2009-2017). Among his many invitations to conduct worldwide are stints with the Rotterdam Philharmonic, DSO Berlin, Leipzig Gewandhaus, Stockholm Philharmonic, the Deutsche Kammerphilharmonie and the German National Youth Orchestra.

The National Arts Centre raised its curtains for the first time in 1969. A bilingual, multi-disciplinary home for Canada’s most creative artists, the NAC strives to be artistically adventurous in each of its programming streams - the NAC Orchestra, Dance, English Theatre, French Theatre, Indigenous Theatre and NAC Presents. The Centre’s national role is reflected in its motto: “Canada is our Stage.” The NAC collaborates with artists and arts organizations across Canada; acts as a catalyst for performance; invests in ambitious new works by artists and arts organizations nationwide; and nurtures the next generation of audiences and artists from across Canada. Situated on the unceded territory of the Algonquin Anishinabeg Nation, the NAC is accessible and welcoming to all, and offers a variety of free programming and events.