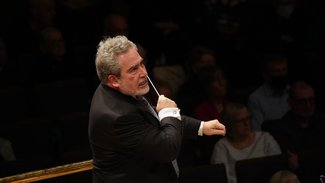 The versatile and charismatic Italian conductor will raise the baton on three operas at the Met this autumn: a new production of Medea and revivals of Tosca and Don Carlo

“Carlo Rizzi […] conducts the Met Orchestra superbly and they play gloriously for him.”

Having opened the 2017/18 season to great acclaim with Bellini’s Norma, Carlo Rizzi returns to The Metropolitan Opera, New York once again to conduct the first opera of its 2022/23 season: a new production – and the Met premiere – of Cherubini’s rarely performed masterpiece Medea (27 September-28 October). His first venture into this demanding score, Rizzi will conduct a stellar cast with soprano Sondra Radvanovsky in the tour-de-force title role and tenor Matthew Polenzani as her Argonaut husband Giasone.

Rizzi says of Medea: “I have been interested in exploring this opera since I was very young and first listened to the famous recording by Tullio Serafin with Maria Callas in the title role. To now be able to perform Medea at The Metropolitan Opera - and for the opening of the new season - is something that I am greatly looking forward to. I am especially excited to be working with such a great cast, and in particular with Sondra Radvanovsky and David McVicar, both of whom I previously collaborated with when we opened the Met’s 2017 season with Norma.”

Medea is the first of three productions by David McVicar that Maestro Rizzi will conduct throughout the autumn at the Met. The second is Tosca (4 October-4 November) which Rizzi conducted in 2018/19 and in early 2022, when New York’s Observer declared “Who better to conduct [Tosca] than Met veteran, Carlo Rizzi? He is as much at home in that hall as Tosca and Cavaradossi are at home duetting in the basilica.” Aleksandra Kurzak sings the role of the eponymous diva, with Michael Fabiano and Roberto Alagna sharing the role of Cavaradossi.

Rizzi’s autumn trio of engagements at the Met concludes with performances of McVicar’s monumental production of Don Carlo (3 November-3 December), marking Rizzi’s debut at the Met with this epic Verdi opera. First seen during the 2021/22 season in the original French version, it is now sung in Italian by an impressive cast led by Russell Thomas in the title role.

Rizzi says of The Metropolitan Opera: “Over the past 30 years the Met has been a place where I have been able to express myself as a musician and to make some of my most artistically-rewarding work. This is thanks to the great orchestra and chorus of this opera house that, with their continued artistry and commitment, make every performance very special.”

Carlo Rizzi holds a reputation as one of the world's foremost operatic conductors, in demand as a guest artist at the world’s most prestigious venues and festivals. Equally at home in the opera house and the concert hall, his vast repertoire spans everything from the foundation works of the operatic and symphonic canon to rarities by Bellini, Cimarosa and Donizetti to Giordano, Pizzetti and Montemezzi. Combining a deep expertise in the vocal art with theatrical flair and the practical collaborative skills honed over decades of experience in the world's finest theatres, he is acclaimed by singers and audiences alike as a master of the operatic craft. Carlo Rizzi was appointed Artistic Director of Opera Rara in 2019, a position that has recently been extended to 2025. Following his tenure as Music Director of Welsh National Opera (1992-2001 and 2004-8), Rizzi has been Conductor Laureate of the Company since 2015.