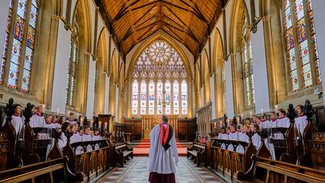 Named by Gramophone as ‘one of the UK's finest choral ensembles’, the Choir of Merton College consists of 30 undergraduate and graduate students at Oxford University, with the primary duty to sing at regular services in the famous 13th-century Chapel. Since the establishment of Merton’s Choral Foundation in 2008, the Choir has gained an international reputation for offering the best of choral music through performances and recordings. In 2016 Merton College became the first in Oxford University to admit girls into its Choral Foundation, and the Choir’s commitment to contemporary music has seen it work with composers such as Birtwistle, Dove, Ešenvalds, Kendall, MacMillan, Rutter, Weir and Kidane.

In the UK, concert performance highlights include the Three Choirs Festival, Cheltenham Music Festival, St John’s Smith Square, Cadogan Hall and Temple Church, and it also regularly works with orchestras. The Choir’s annual Palm Sunday weekend festival, Passiontide at Merton, has led to collaborations with groups such as The Cardinall’s Musick and The Marian Consort.

Merton College Choir regularly tours abroad and has recently visited the USA, Hong Kong and Singapore, France, Italy and Sweden, while in 2017 it sang the first Anglican service in St Peter’s Basilica in Rome.

The Choir also enjoys a critically acclaimed relationship with Delphian Records, with many recordings named Gramophone’s ‘Editor’s Choice’, and in 2020 it won the award for best choral album at the BBC Music Magazine Awards.

Projects in 2022 include the return of Passiontide at Merton (8-10 April 2022), which will include the festival’s first concert at the Sheldonian Theatre with Mozart’s Mass in C minor, a US tour in September, and a new release on Delphian Records featuring Ian Venables’s Requiem and anthems for Choir and orchestra by Herbert Howells. 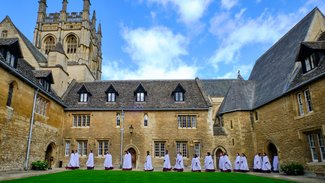