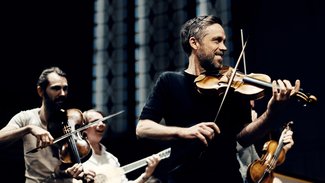 "The whole joyous evening was a liberation, carrying us back to a time when the terms “classical” and “folk” hadn’t yet been invented, and music was simply music."

Barokksolistene is one of the world’s most dynamic and exciting groups working in the field of historically informed performance. They present music outside of the traditional concert model and on the verge of multiple genres, classically intentioned but constantly striving to engage with folk and experimental music, improvisation, visual arts, dance and storytelling. The group was founded in 2005 by Norwegian violinist Bjarte Eike, who has long been exploring alternative ways of approaching classical music. Although rooted in historically informed performance practice, his drive to reach new audiences and curate new and exhilarating experiences has led him to be invited to appear at festivals across many genres: early music, classical music, folk music, experimental music and jazz. Over the past few years the group have also added a theatrical dimension to their work, becoming involved in fully-staged productions including Purcell’s Dido and Aeneas for the Norwegian National Opera and Ballet in 2019, and in the same year a production of Shakespeare’s A Midsummer Night’s Dream at Haugesund Theatre in Norway with a new script written by Bjarte Eike himself.

Barokksolistene’s new and innovative concepts include The Alehouse Sessions, an ever-changing project looking at music of the English 17th century tavern, a creation described by The Strad as “innately theatrical, genre bending and suffused with great musicianship”. Their album of the project was released on Rubicon Classics in 2017, immediately made it to the UK Top 10 classical charts, and garnered critical acclaim. Their next recording The Playhouse Sessions follows on from its predecessor, expanding on the narrative of the alehouse, exploring staged music and digging deeper into Purcell, Shakespeare and the broadside ballads. The recording will be released on Rubicon Classics on 23 September 2022 with a launch concert on the same evening at the Purcell Room, followed by an Alehouse session in the foyer.